The Journey to Machu Picchu

Two months after my daughter was born I moved from Trinidad to Peru. I was somewhat acquainted with the country, having visited on a few occasions for work but it took two-and-a-half years of living there to help me truly appreciate the land of contrast that is Peru.

From the snow-capped Andes to its desert dunes, from the Amazon rain-forest teaming with tropical flora and fauna to its rocky coast where penguins, sea lions and humpback whales frolic, from the old towns and ancient ruins, to the busy and modern city of Lima; Peru is in every way a land contrast. 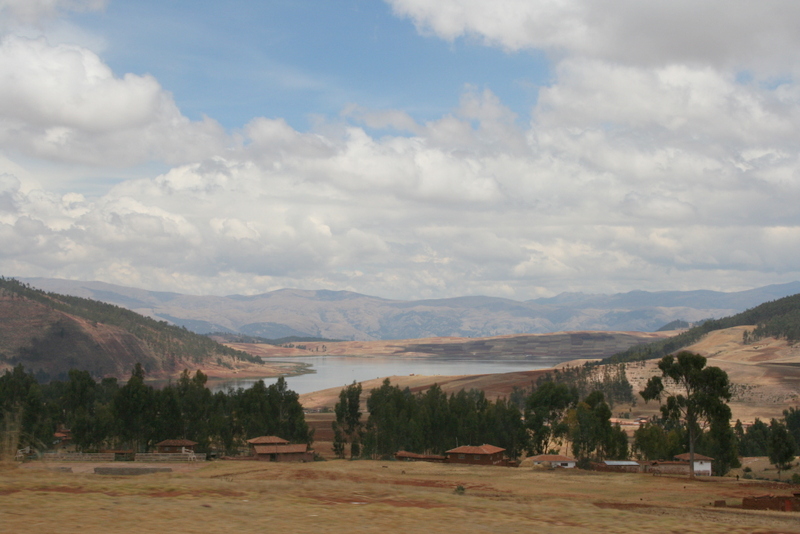 Having been there for a couple of months I realized that my 40th birthday was fast approaching. I needed a plan, a momentous plan to celebrate this milestone. It’s not every day a girl turns 40, right! So, Michele and I (with our daughter in tow) decided to visit one of the Seven Wonders of the World -Machu Picchu- and fortunately it was only a few hours away.

Machu Picchu was built by the Inca Empire between the 15th -16th centuries. Located atop the Andes Mountains this majestic city is made up of 150 buildings, including sanctuaries and temples. While many speculate as to what this city was used for and by whom, thousands of visitors annually make the treacherous trek to this manmade wonder.

Once we started planning, it was clear that Machu Picchu would be the highlight of the trip. However, the journey to get to this ancient city through the Sacred Valley was  an adventure of its own. From Lima, the capital city of Peru, we flew to Cuzco, a historic city once the capital of the Inca Empire, located at an elevation of 11,200 feet. One can expect to feel breathless, dizzy and nauseous while your body adjusts to the altitude, but it is nothing that chewing on some coca leaves or a few cups of coca tea can’t fix. Even the hotels happily offers the tea as a welcome drink and coca leaves can be purchased at almost every shop in Cuzco. 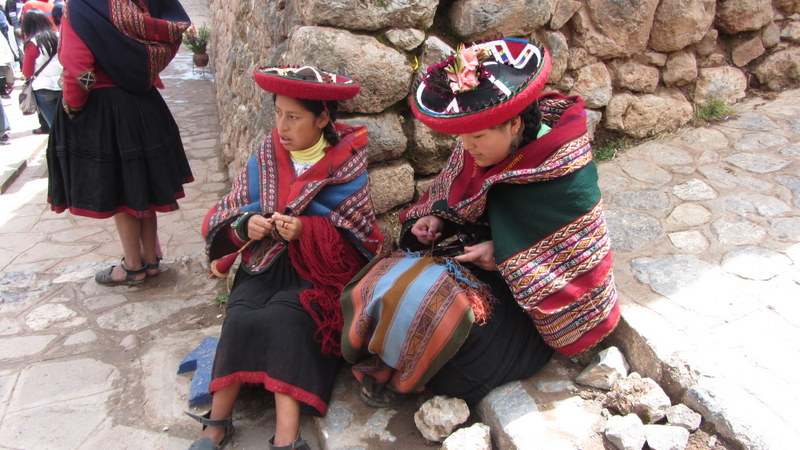 Walking along the streets of the old town we  noted that even the stones revealed the story of a tempestuous past.  Easily identifiable Inca stones used by the Spaniards after destroying the Inca city, have become the foundation of most of the town’s buildings. 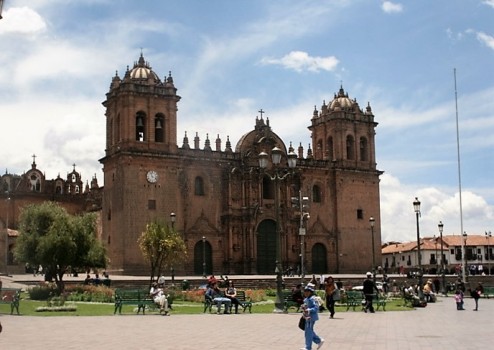 We were  surprised to learn that the plazas, churches and cathedrals built by the Spaniards are all constructed directly on top of the ancient Inca city. The church of Santo Domingo, for instance, was built on top the most splendid and important of all Inca temples- Qurikancha, the temple of the sun god so Plaza de Armas, which in Inca times was the centre of the town used for ceremonies and festivals. Today Cuzco gives visitors a glimpse into the Empire and their conquerors. 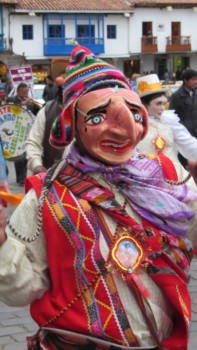 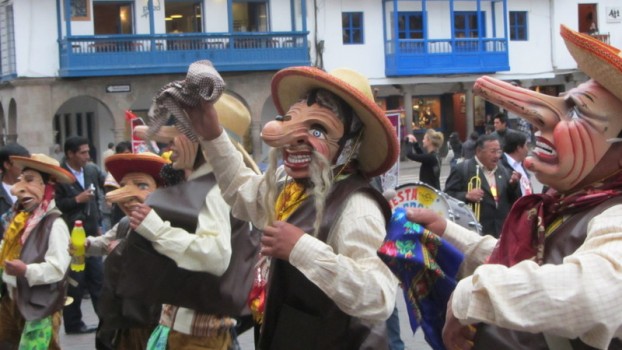 Leaving Cuzco behind we were on our way to Chinchero and luckily for me it was Sunday, which is the absolute best day to visit the Chinchero market. The Quechua Indians that live here are direct descends of the Incas. Their language, dress, music and crafts stretch over centuries. Here in their colourful market place I  witnessed the ancient art of trueco or bartering. Goods like fruits, flowers, fabric, vegetables, dolls are all spread out on the ground under thatched straw roofs. No money is used here, but a bag of coca leaves can be happily exchanged for a few cassavas or choclo-corn. The Quechua women  dominate the market. Women squat down wearing broad brimmed hats to inspect goods and quibble over fair trade. Mothers with their babies on their backs wrapped in brightly coloured Aguayo, use free hands to carry the bulging bags from their mornings bargaining. I wondered how I would survive using my bartering skills. 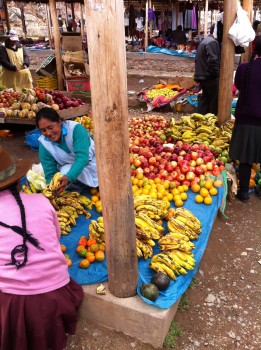 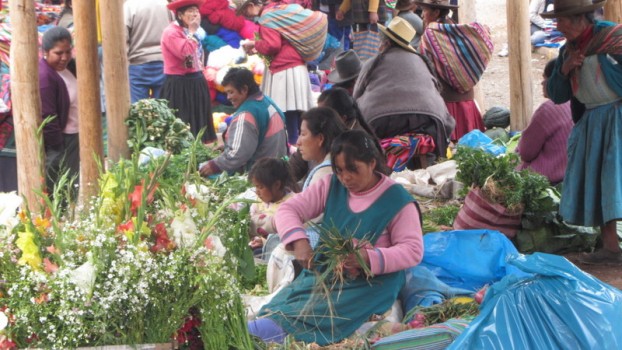 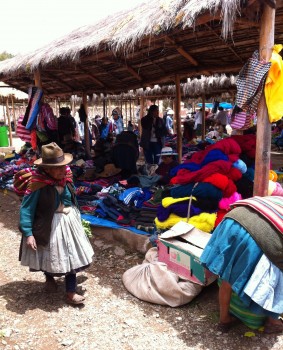 Walking out of the market we followed crooked stairs which led to a surprising discovery of three young, beautiful Quechua girls dying alpaca yarn. I looked on intently as they produce a wide spectrum of vibrant colours using various dried insects, seeds and plants native to the valley. Funnily the yarn was being spun on the skeleton of an old umbrella. As traditional as their process may have been this was innovation at its purest. 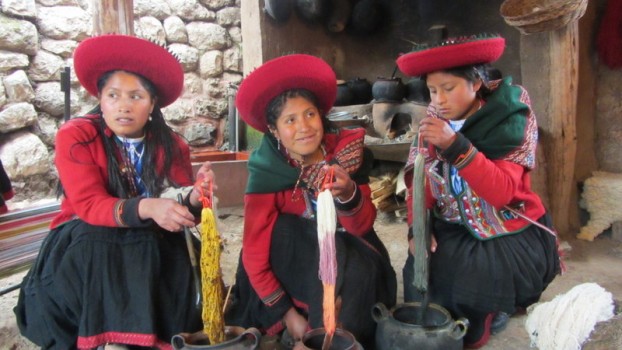 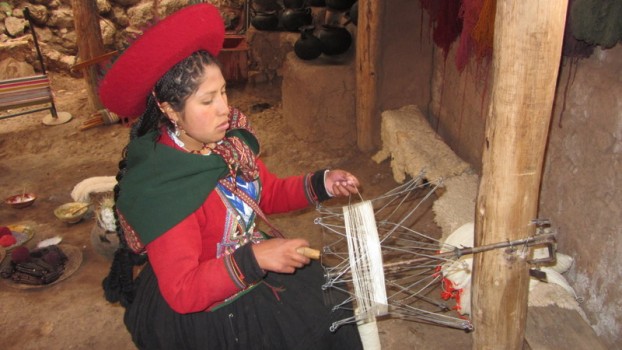 Or at least I left thinking it was until I got to Moray, the site of another Inca ruin northwest of Cuzco. Agriculture played a major role in the lives and success of the Incas. At first glance Moray looks like a large crater with circular terraces that expands in size as they move upwards. This is said to have created a micro climate allowing a range of crops to be planted on each tread of the terrace. Even today the techniques used here centuries ago are being studied to unlock the mysteries behind Moray. 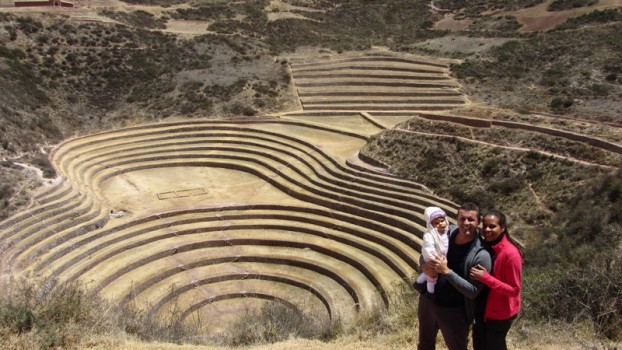 Our last stop for the day was the salt ponds of Maras. We followed a snaking precipitous road 9482 ft. high in the Andes Mountain to arrive at these ancient salt ponds. Sloped into the dark rock are hundreds of small white rimmed pools. Highly concentrated salty spring water flows from the Qoripujio spring, it is then directed to these ponds by a network of small channels. The water in each pond evaporates, leaving crusty salt crystals to be collected. The colour of the salt is pink. Besides being the secret of success to many of Peru’s top restaurants, there is a long list of health benefits linked with consuming the mineral enriched Maras salt. So of course, I picked up a few bags of pink and proceeded to make my way through the salt ponds. Looking back I am not sure why I thought this would be a good idea. Walking on narrow rims of slippery crusted salt along a sloping terrain with a 9 month old baby in tow. Ok, you live and you learn. 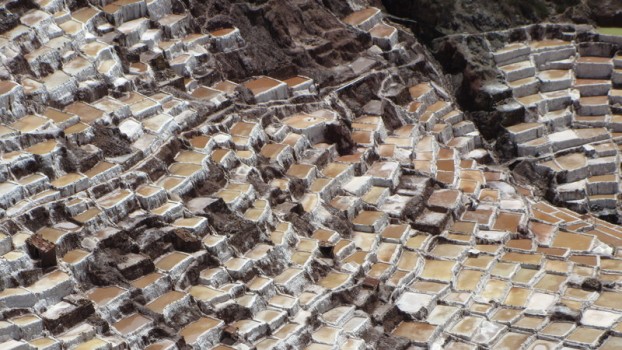 That evening I was happy to get to the hotel after a very long and eventful day of exploring the Sacred Valley. That night a sumptuous dinner was ordered from room service to celebrate my birthday, which Michele and I quietly ate in the bathroom as not to disturb our daughter who finally fell fast asleep. Momentous maybe not; unforgettable, absolutely.